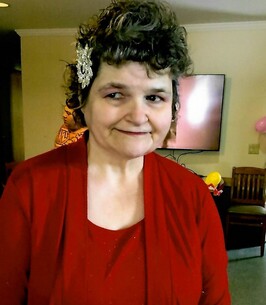 Angela Millspaugh, age 59 and a longtime resident of Silver Lake, passed away in the early hours of Monday, June 28, 2021. She had been bravely fighting cancer, but her passing was unexpected.

Born on September 9, 1961, Angela was a strong, persistent person. She was also very caring and loved hugs from those who knew her best. She also loved having her picture taken and being pampered – getting her hair done, nails painted, etc. She also loved dancing and listening to music, especially oldies and enjoyed art and painting.

Though Angela could not communicate verbally, she was never afraid to interact with those around her, communicating through her own sign language and facial expressions. She was not afraid to show her pleasure or displeasure, either!

Survived by her roommates, friends, caregivers and family, Angela will be dearly missed. She was preceded in passing by her parents.

Those who survive will gather at Harrison Center Church, 965 South 800 West in Etna Green, Indiana. Gathering will begin at 10 a.m. with funeral services at 11 a.m on July 9th. Burial will take place in Warsaw’s Oakwood Cemetery.

In lieu of flowers, those wishing to express sympathy are encouraged to give of their time to Cardinal Services. Monetary gifts would also be accepted via mail at 504 North Bay Drive, Warsaw, IN 46580.
To order memorial trees or send flowers to the family in memory of Angela Millspaugh (Millspaugh), please visit our flower store.