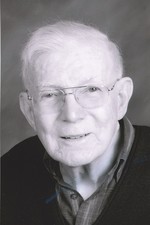 William “Bill” Aitken, age 90 and a lifetime resident of Warsaw, passed away quietly on Monday, October 12, 2020 at 1:10 p.m. in Mason Health and Rehabilitation Center.

Bill was the plant maintenance supervisor for Kimbal Glass for nearly 40 years. He was hardworking and loved working with his hands. He could fix nearly anything and even built his home by hand. He was trustworthy and kind and was an honorably discharged veteran of the Army National Guard.

A Life Celebration® visitation will be held at Titus Funeral Home on Thursday, October 15, 2020 beginning at Noon. At one o’clock, those in attendance will proceed to Oakwood Cemetery for a graveside service, officiated by Titus Funeral Home’s funeral celebrant, Sharon Brockhaus.

In lieu of flowers, the family has asked that gifts be directed to Mason Healthcare Center’s Activities department. Please mail gifts to Mason Health and Rehabilitation Center, 900 Provident Drive Warsaw, IN 46580. Condolences may be left for the family at www.TitusFuneralHome.com