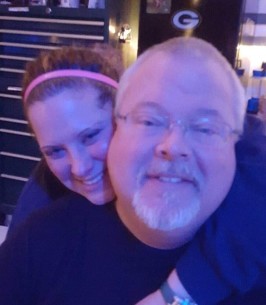 Share this tribute
Memorial Candles Lit for Steven E. Swope | SEE ALL
Light a Candle
"We are honored to provide this Book of Memories to the family."
— Titus Funeral Home
"I love you baby. I will be with you again one day but until then I will devote my life to raising our children in your honor and memory..."
— Kathryn
Funeral Details Memory Wall Photos & Videos Send Flowers

Print
Steven Swope, age 51 and a resident of Warsaw, passed away unexpectedly just after midnight on Tuesday January 29, 2019 in Fort Wayne’s Lutheran Hospital.

Steven was born in South Bend to Dean and Cleda (Lawhorn) Swope on January 26, 1968. He grew up in South Bend and was a 1986 graduate of John Adams High School. Later, he graduated from Butler University with a bachelor’s degree in secondary education.

Steven’s life would forever change when he met the love of his life, Kathryn Brugh. The two were united in marriage on October 1, 2005 in Mishawaka. Together with their three children, Kathryn survives in Warsaw.

Steven was a patient, giving and caring person and would go out of his way to help others. He never knew a stranger and, if you were lucky enough to call Steven your friend, you knew you were his friend for life. A fisherman and hunter, Steven was a member of the NRA. He was also a huge fan of Green Bay Packers football and loved spending time outdoors. More than anything, time spent with his family and his children was precious. Strong in his faith, Steven was proud to be raising his children as Christians.

Those who survive with memories to cherish include his wife, Kathryn Swope; sons, Wesley Soliday and Morgan Swope; daughter, Avery Swope; parents, Dean and Cleda Swope and sister, Christy (Jen) Swope – all of Warsaw. Also surviving are nieces, Beatrice Cooper of Ohio and Sophie Swope of Michigan. Steven’s brother, Bruce Swope and both sets of grandparents received him in Heaven.

Memorial donations may be directed to Alzheimer’s and Dementia Services of Northern Indiana, 922 East Colfax Ave., South Bend, Indiana 46617. Condolences may be left online at www.TitusFuneralHome.com

We encourage you to share any memorable photos or stories about Steven. All tributes placed on and purchased through this memorial website will remain on in perpetuity for future generations.

Add Photos Post Condolence
MW
To Christy and Jen, so very sorry for your families loss. I pray for God to give you the strength and peace that only He can. Thinking of you.
Melinda Webb - Sunday February 03, 2019 via Condolence Message
LT
Sorry for your loss. Steve “Cool Breeze,” was a great fraternity brother. He was great friend and always had time for others. I have good memories of him from our college days in Phi Delta Theta. May God welcome him to heaven.
Larry Taylor - Sunday February 03, 2019 via Condolence Message

I love you baby. I will be with you again one day but until then I will devote my life to raising our children in your honor and memory.
Kathryn - Saturday February 02, 2019 via Memorial Candle

With deepest sorrow for the loss and enduring celebration of the life of a great and kind man. Blessings, The Lindsay Family
Ron - Tuesday January 29, 2019 via Heartfelt Sympathies
1
Page 1 of 1
Share
×

Send flowers to the family
Choose from beautiful standing, table and basket arrangements. Safe and secure online ordering.
View Flower Arrangements
What has already been purchased for the family?
Family Log-In