To share your memory on the wall of Steve Beverly, sign in using one of the following options:

Provide comfort for the family of Steve Beverly with a meaningful gesture of sympathy.

Born on September 12, 1955, Steve was born in San Bernardino, Calif. He was the son of Paul and Cora Ruth ... Read More
Steve Beverly, age 63 of Warsaw, passed away unexpectedly on Tuesday, February 5th at 11:15 a.m. in Kosciusko Community Hospital.

Born on September 12, 1955, Steve was born in San Bernardino, Calif. He was the son of Paul and Cora Ruth (Marshall) Beverly. He was a 1974 graduate of Warsaw High School and previously worked in construction where he was the owner/operator of PCB Construction. More recently, he was working for the Times Union and Journal Gazette

Steve was a hard worker and an animal lover. He enjoyed television shows like Buffy and Super Natural. Ornery and funny, Steve was very outgoing and liked meeting new people. He never knew a stranger and always had a story to tell.

Survivors include his daughter, Amanda (Gene) Denz of Warsaw and siblings, Dale (Barb) Beverly of Warsaw, Donna Quint of Warsaw, Deb (Jim) Chagares of Richmond and Tracy Beverly of Utah. Also surviving are eight grandchildren and one great-grandson. He was preceded by his parents.

Visitation will be at Titus Funeral Home, 2000 East Sheridan Street, Warsaw on Friday, February 8th from Noon to 2 p.m. A service will follow in the funeral home with Reverend David Hummel officiating.

Memorial donations may be directed toward the funeral expenses of Steve Beverly in care of Titus Funeral Home, 2000 East Sheridan Street, Warsaw, IN 46580.
Read Less

We encourage you to share your most beloved memories of Steve Beverly here, so that the family and other loved ones can always see it. You can upload cherished photographs, or share your favorite stories, and can even comment on those shared by others.

Posted Feb 16, 2019 at 09:19am
Steve was our faithful Times Union carrier. He was so good about holding our papers if we were away. He will be missed.
Comment Share
Share via:
MS

Posted Feb 07, 2019 at 08:23pm
We are saddened to hear about the loss of your brother, Tracy. Please know that you and your family are in our thoughts and prayers.
Comment Share
Share via:
BH

Posted Feb 07, 2019 at 03:47pm
My heart aches with Steve's family at his passing. Steve worked for me at Safe-Way Door twenty-five years ago. I always enjoyed hiim and his work ethics. Steve sometimes stopped on Columbia Street to visit with me many years later. Steve will be terribly missed by not only his family, but by his many friends. Bob Hardin - Warsaw
Comment Share
Share via: 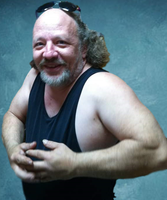