To share your memory on the wall of Ruth Howard, sign in using one of the following options:

Provide comfort for the family of Ruth Howard with a meaningful gesture of sympathy.

She was the daughter of Frank and Hona (Thacker) Hawkins, spending her childhood in the Bourbon area. She was... Read More
Ruth A. Howard, a lifetime area resident, passed away quietly on Monday, September 9th at 12:55 a.m. in Miller’s Merry Manor.

She was the daughter of Frank and Hona (Thacker) Hawkins, spending her childhood in the Bourbon area. She was a 1959 graduate of Tippecanoe Valley High School and worked for Da-Lite Screen for more than forty-seven years.

Ruth was spunky and friendly. She rarely knew a stranger and was generally well-liked by each of her neighbors; most likely because she was amiable and a true joy to be around. She enjoyed crochet and dearly loved children. She could spend hours people watching (and hummingbird watching) on her front porch.

A Life Celebration has been planned with Titus Funeral Home, 2000 East Sheridan Street, Warsaw. Visitation will be on Friday from 11 to 1 p.m. in the funeral home. Beginning at 1 o’clock, Pastor Jamy Gregory of Warsaw Community Church will officiate Ruth’s funeral service with burial in Warsaw’s Oakwood Cemetery.

Receive notifications about information and event scheduling for Ruth

We encourage you to share your most beloved memories of Ruth here, so that the family and other loved ones can always see it. You can upload cherished photographs, or share your favorite stories, and can even comment on those shared by others. 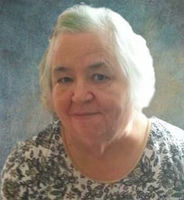