To share your memory on the wall of Ruby May, sign in using one of the following options:

Print
Ruby May, a longtime resident of Kosciusko County, passed away in the loving care of her great-granddaughters, LaShea May and Cadence May in their Warsaw home on Monday, June 22, 2020 just after 4 p.m. She was 85 years old.

Born in Prest... Read More
Ruby May, a longtime resident of Kosciusko County, passed away in the loving care of her great-granddaughters, LaShea May and Cadence May in their Warsaw home on Monday, June 22, 2020 just after 4 p.m. She was 85 years old.

Born in Prestonsburg, Kentucky on April 6, 1935, she was the daughter of the late Malcolm and Malvrie (Davis) Sparks. She was a 1955 graduate of Sidney High School. Later that year, on June 30, Ruby was married to Robert J. May who preceded her in passing in 2003.

Ruby was a loving person with a sassy streak. She could be stubborn, too but she had a heart of gold with a never-ending love for family; she cherished time spent with them and is remembered for her peanut brittle and her chocolate fudge. She enjoyed reading, listening to classic country music, collecting porcelain dolls, and finding a bargain at Goodwill and garage sales. Professionally, she had worked at Miller’s Merry Manor and as a CNC operator for Paragon Medical.

In addition to her husband, Robert, those who preceded her in passing include her parents, Malcolm and Malvrie; son, George May; sisters, Adeline Smith and Dora Sparks; brothers, Otto Sparks, Bill Sparks and Earl Sparks and grandsons, Jonathan and Willard Robert May. Those who survive with memories to treasure include her children: John (Lisa) May of Rochester, Bill (Cindy) May of Seymour, TN, Carson (Shelly) May of Mentone, Rod (Linda) May of Knoxville, TN, Robin (Josh) Rhodes of Warsaw and Teri May of Warsaw and brother, German Sparks. Also surviving are 22 grandchildren, 40 great-grandchildren and 6 great-great-grandchildren.

Receive notifications about information and event scheduling for Ruby

We encourage you to share your most beloved memories of Ruby here, so that the family and other loved ones can always see it. You can upload cherished photographs, or share your favorite stories, and can even comment on those shared by others.

Teresa Holbrook and Your Speedway Family, Kim, Kyndra, Meora & Tre. sent flowers to the family of Ruby May (Sparks).
Show you care by sending flowers

Teresa Holbrook purchased flowers for the family of Ruby May. Send Flowers

Flowers were purchased for the family of Ruby May. Send Flowers 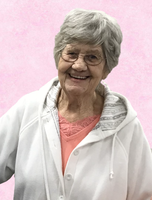