To share your memory on the wall of Roger Hudson, sign in using one of the following options:

Born on May 11, 1954, he was the son of Kenneth L and Barbara Jean (Cook) Hudson. He was a 1972 graduate of Warsaw Community High School where he played football and marched with the tuba in the band. He went on to work for DePuy, retiring in 2016 after 34 years of service.

An avid NASCAR fan, Roger was always thrilled when Kyle Busch was first to see the checkered flag wave. He had been a motorcyclist, owning several over the years and loved the freedom motorcycling offered him. He was a person of faith who loved to watch God’s creatures in the field behind his home – especially the birds. Nothing meant more to Roger than time spent with his family; playing cards and games were favorite pastimes.

A Life Celebration® is planned with the assistance of Titus Funeral Home, 2000 East Sheridan Street in Warsaw where visitation will be held on Friday, September 18, 2020 beginning at 10 am. At Noon, Pastor Terry Bradford of First Freewill Baptist Church of Kosciusko County will officiate Roger’s Life Celebration service. Burial will follow in Harrison Center(Wooden) Cemetery.

Memorial gifts may be directed to Kosciusko Home Care and Hospice whose loving, tender care of Roger in his final days is deeply appreciated. Gifts may be mailed to P.O. Box 1196 Warsaw, IN 46581. Condolences may be left at www.TitusFuneralHome.com
Read Less

Receive notifications about information and event scheduling for Roger

We encourage you to share your most beloved memories of Roger here, so that the family and other loved ones can always see it. You can upload cherished photographs, or share your favorite stories, and can even comment on those shared by others.

Brett, Sarah, & Clara Hudson, Colleen Myers, and other have sent flowers to the family of Roger Hudson.
Show you care by sending flowers

Posted Sep 17, 2020 at 12:17pm
As you grieve know that we are remembering you all and honoring the memory of Roger. With deepest sympathy,

Posted Sep 16, 2020 at 08:59pm
Bob, I am so sorry for your loss , but we know Roger is in good hands now. Know my thoughts and prayers are with you and your families. Will always remember the baseball games, hide and seek, and other games we played as kids. Peace be with the family.

Posted Sep 14, 2020 at 12:43am
Roger was a very loving caring gentle soul. After our daughter katelyn had her heart transplant and coded at midnight he hardly left her side. She swelled and the heart swelled and they had to put her heart on her chest. He was able to do something I could not do . See her like that and stay with her. Her Daddy was with her when she went back home at with our Lord at 29 days old. I am so sorry for your loss. Phillann
Comment Share
Share via: 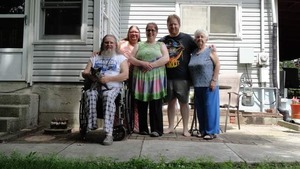