To share your memory on the wall of Richard Roehm, sign in using one of the following options:

Provide comfort for the family of Richard Roehm with a meaningful gesture of sympathy.

He was born in Indianapolis on November 28, 1934 and was the only son of Edgar W. and Clara (Biesmeyer) Roehm. He attended Hanover College where he was a member of Beta Theta Pi and was a graduate of Broadripple High School. It was in high school where he met Sandra “Sandy” Bernett; the two were united in marriage on May 26, 1956.

Richard was a woodworker and a lover of the lakes. He enjoyed time refurbishing and restoring old, wooden boats. He was also a fan of and player of hockey and was a founding member of the Columbus Youth Hockey league where he also coached. Professionally, he was in medical and surgical supply sales, retiring from management.

In addition to his wife, Sandy, those who celebrate his life through cherished memories include his daughter, Cynthia (husband, Ken) Patterson of Warsaw and son, Kurt (wife, Olga) Roehm of Costa Rica; three grandchildren and two great-grandchildren. His parents preceded him in passing.

Donations are being accepted for: ALZHEIMERS FOUNDATION OF AMERICA INC.

We encourage you to share your most beloved memories of Richard here, so that the family and other loved ones can always see it. You can upload cherished photographs, or share your favorite stories, and can even comment on those shared by others.

Posted Nov 21, 2019 at 12:07pm
My thoughts and prayers are with you at this difficult time. I wish I could be with you all.
John Ayers
Comment Share
Share via: 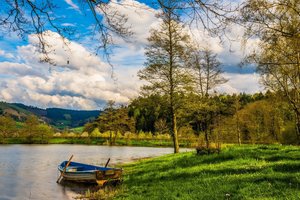