To share your memory on the wall of Mazie Head, sign in using one of the following options:

Print
Mazie Head, a resident of Warsaw, passed away on Thursday, January 3, 2019 just before 9 p.m. in her home. Surrounded by her loving family at the time, she was 72 years old.

Mazie, as everyone knew her, was born Rebecca Hively on August... Read More
Mazie Head, a resident of Warsaw, passed away on Thursday, January 3, 2019 just before 9 p.m. in her home. Surrounded by her loving family at the time, she was 72 years old.

Mazie, as everyone knew her, was born Rebecca Hively on August 3, 1946 in Atwood. She was the daughter of Willard and Eva (Redinger) Hively. She attended local schools and, on December 24, 1965, she was united in marriage to Terry Head in Livingston, TN.

Mazie was a kind, hard working person. She functioned as secretary, office manager and book keeper for her family’s business, Terry’s Automotive, where she worked alongside her husband. She enjoyed BINGO and could often be found playing at the FOE or American Legion. She also enjoyed puzzles and being outside, tending to the yard. More than anything, she loved time spent with family, especially her grandchildren and great-grandchildren.

Friends may join family for a time of visitation from 10 to Noon on Tuesday, January 8th at Titus Funeral Home, 2000 East Sheridan Street, Warsaw. Beginning at Noon, Pastor Glenn Hall of Harvest Community Church, Pierceton will officiate a celebration of Mazie’s life. Burial will follow in Oakwood Cemetery.

Memorial gifts may be made to the Warsaw Salvation Army. Online condolences may be left at www.TitusFuneralHome.com
Read Less

Receive notifications about information and event scheduling for Mazie Head

We encourage you to share your most beloved memories of Mazie Head here, so that the family and other loved ones can always see it. You can upload cherished photographs, or share your favorite stories, and can even comment on those shared by others.

Roger Terrill, Alisha & Richie Elkins & Family, Jayden Head, and other have sent flowers to the family of Mazie Head.
Show you care by sending flowers

Posted Jan 04, 2019 at 10:13pm
I knew Mazie for many years. She always told it like it was, and you knew. She was a great person to know in my years living in Warsaw.
Condolences to her family from mine. Tim and Marie Lowman.
Comment Share
Share via:
BH 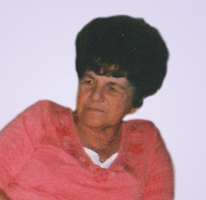