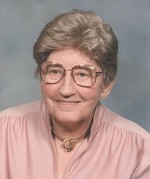 Reba and her twin sister, Ruby were born on March 10, 1921 to William and Mary (Roseborough) Geeting in Connersville, IN. Ruby and their parents both preceded Reba in passing.

Reba was united in marriage to Paul William Ellis on October 21, 1956 in New Castle, IN. Their 25-year union was blessed with two children. Paul preceded Reba in passing on July 14, 1981.

Simply put, Reba was a caregiver. With a kind, attentive nature she was always caring for others, putting their needs before her own. Officially she was a homemaker and also worked for some time as a receptionist at Farmers Insurance. In her spare time, she enjoyed word search and crossword puzzles. She and Paul were previously active at First Friends Meeting in New Castle.

Those who survive include their children: son, Terry (wife, Karla) Ellis of Winona Lake and daughter, Mary Beth Murphy of Lebanon, IN; grandchildren: Todd Frazier of Lebanon, Josh (wife, Kaylee) Frazier of Lebanon, Jennifer (husband, Todd) Kohler of Warsaw, Laura Franklin of Warsaw and Paula (husband, John) Leeper of Warsaw; 12 great-grandchildren and 4 great-great-grandchildren. In addition to her parents, husband, and sister, Ruby Geeting, Reba was preceded in passing by sister, Dorothea Geeting whom Reba had lovingly cared for in her final days.

A brief time of visitation will be held at Titus Funeral Home, 2000 East Sheridan Street, Warsaw beginning at 10 a.m. on Wednesday, July 17th. At 11 a.m., those who wish to join will depart from the funeral home for South Mound Cemetery, 505 Bundy Avenue, New Castle where a graveside service will be held. Pastor Colin Horne of First Baptist Church, Warsaw will officiate.

In lieu of flowers the family has asked that gifts be directed to the American Heart Association, 300 South Riverside Plaza, Suite 1200, Chicago, Ill. 60606. Memorial condolences may be sent to the family by visiting www.TitusFuneralHome.com