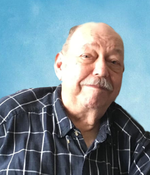 Randy W. Hunter, a resident of Warsaw, passed away on Wednesday, February 27, 2019 at 5:04 p.m. in Kosciusko Community Hospital. Age 75 at the time of his death, he passed away quietly which is just how he lived.

Born on January 29, 1944 in South Bend, Randy was one of five children. He was the son of Byron G. and Winifred (Fiwek) Hunter. He graduated from North Side High School in Fort Wayne and went on to earn an associate degree from IPFW. He retired in 1992 from Magnavox Fort Wayne with 18 years of dedicated service.

Randy was a quiet, unassuming person. He enjoyed time spent with his family but otherwise lived a private life. He liked electronics and had built R/C planes for some time. This was fitting as he was previously licensed as a private pilot and enjoyed flying. He also enjoyed hunting and fishing, making several trips to Canada to do so. Each year he looked forward to deer and squirrel hunting. He once shot a bear and he genuinely enjoyed the time he spent hunting, fishing and being outdoors.