Obituary for Michael A Brown 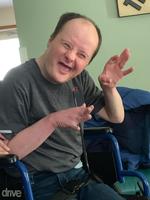 Michael Allen Brown, age 44 and known to many as “Mikey,” passed away on Friday, May 15, 2020 at 7 a.m. in his home in Auburn, Indiana. He had only recently moved there and was previously a resident of Winona Lake.

Mikey was the son of Eldon Brown and Bernice (Bordner) Brown. He was born in South Bend on March 17, 1976 and was born with a contagious smile. He had a feisty personality, liked time spent in the kitchen and loved food of all kinds. He liked playing with balloons and balls and liked colorful things. He was rarely without a clothing hanger in hand and loved classic rock and heavy metal music – the louder the better.

Mikey was preceded in passing by his parents and grandparents. Surviving are his sisters: Debbie Haggin; Christina (Daniel) Wooten and Kimberly (Michael) Reid; brothers, Colin Chadwell and Eldon Chadwell and several nieces and nephews.

Friends may gather with family for a time of visitation on Thursday, May 21, 2020 at 11 a.m. in Titus Funeral Home, 2000 East Sheridan Street in Warsaw. Beginning at Noon in the funeral home, Pastor Carl Adams of Cowboy Church in the Meadows will officiate Michael’s funeral service. Burial will follow in Warsaw’s Oakwood Cemetery.

Memorial gifts may be directed to Cardinal Services of Indiana, 504 North Bay Drive, Warsaw, IN 46580.