To share your memory on the wall of Mary Kinney, sign in using one of the following options:

Print
Mary Louise Kinney, age 69 of Syracuse and formerly of Evart, Michigan, passed away quietly on Wednesday, May 13, 2020 at Miller’s Merry Manor in Syracuse.

Mary was the daughter of Joseph Robert and Thelma (Baker) Smith. She was one o... Read More
Mary Louise Kinney, age 69 of Syracuse and formerly of Evart, Michigan, passed away quietly on Wednesday, May 13, 2020 at Miller’s Merry Manor in Syracuse.

Mary was the daughter of Joseph Robert and Thelma (Baker) Smith. She was one of ten Smith children and was raised in Midland, Michigan where she attended Midland High School.

Mary was a homemaker with a kind, giving nature. She was generous and had a strong, Christian faith, attending church in Evart for many years. She enjoyed crochet and knitting.

Mary was preceded in passing by her husband Gerald “Ed” Kinney who passed in 2018. She was also preceded by her parents and six siblings including sisters: Violet, Thelma June, and Virginia and brothers: Robert, Roger and Marvin. Mary is survived by brothers, John Smith of Sanford, Mich. and Dick (wife, Sheila) Smith of rural Leesburg; by sister, Lena Perry of Midland, Mich. and by many nieces and nephews.

Receive notifications about information and event scheduling for Mary

We encourage you to share your most beloved memories of Mary here, so that the family and other loved ones can always see it. You can upload cherished photographs, or share your favorite stories, and can even comment on those shared by others. 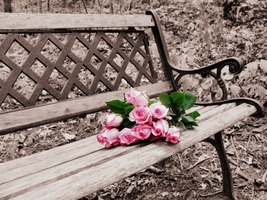