To share your memory on the wall of Martha Hoffman, sign in using one of the following options:

Provide comfort for the family of Martha Hoffman with a meaningful gesture of sympathy.

She lived most of her life in Claypool, Indiana graduating from Claypool High School where she played saxophone in the marching band. On July 10, 1954 in Akron, Indiana she and Edward A. Hoffman were joined in holy matrimony. They roller skated together for many years at Rock Lake Skating Rink, attended Mount Pleasant Church in Claypool where they shared their musical talents and spent several winters together in Gulf Shores, AL involved with an active Snow Bird group.

Spring, summer, and fall you could find Martha in her garden tending flowers and herbs while in cooler months she focused on quilting, oil painting or researching genealogy. Awarded Our Lady of Kosciusko in 1998 after years of volunteer service including Daughters of American Revolution, United Methodist Women, Order of Eastern Star, Red Bird Mission Hospital Auxiliary, 4H, Home Health Care, and Red Cross. Additionally she served on the boards of Grace Children’s Hospital, International Child Care, and United Methodist District Missions.

Martha was best known for her work in Haiti which began in 1969. For 13 years she held local craft bazaars to raise money for Grace Children’s Hospital, a tuberculosis hospital for children. She and Ed raised community awareness by leading tour group trips to Haiti. Her focus broadened to include more missions and she began facilitating volunteers (80 at last count) to sew, donate fabric and transport tons of finished product to Haiti. Most recently one of the missions created “Martha’s Sewing Group”, where they teach young ladies to work with fabric.

Family and friends will come together for sharing Wednesday, February 6th from 3-7 p.m. at Titus Funeral Home in Warsaw, Indiana. There will be an additional hour of visitation prior to the funeral. A service celebrating Martha’s life will take place Thursday, February 7th at 11 a.m. at the funeral home. Officiating will be Pastor Glenn Hall. Burial will follow in Oakwood Cemetery in Warsaw. The family has asked that gifts in Martha's memory be directed to Haiti’s Little Angels, PO Box 151, Vero Beach, FL 32961.

We encourage you to share your most beloved memories of Martha here, so that the family and other loved ones can always see it. You can upload cherished photographs, or share your favorite stories, and can even comment on those shared by others.

Posted Feb 07, 2019 at 09:02am
Martha watched me grow up being around Claypool area. She was a wonderful lady always had a smile God bless her family during this time of grief
Comment Share
Share via:
JH

We seem to give them back to you, Oh God, who gave them to us.
Yet as you did not lose them in giving, so we do not lose them by their return.
For life is eternal, and love is immortal, and death is but a horizon,
And a horizon is nothing save the limit of our sight.

Posted Feb 05, 2019 at 03:05pm
Please accept our most heartfelt sympathies for your loss... our thoughts are with you and your family during this difficult time.

Posted Feb 04, 2019 at 01:30pm
We send our sincerest sympathy for the passing of your mother. May God bring comfort to you and your family during this difficult time in a way that only He can.

Posted Feb 03, 2019 at 11:31am
My deepest sympathy for your loss. What seems to be a long life is never long enough where our loved ones are concerned. Our Heavenly Father feels the same way. That is why He has promised to swallow up death forever and soon end all our suffering. (Rev.21:3-5; Isa. 25:8) May His promises comfort you now and give you a real hope for the future. 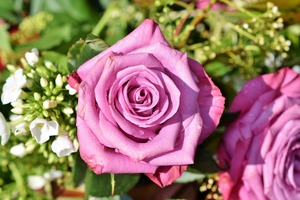