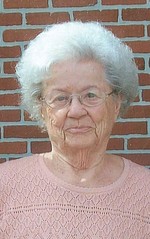 Martha J. Decker, a longtime resident of Warsaw, passed away on Wednesday, February 6, 2019. in
Kingston at Dupont, Fort Wayne. She was 91 years old.

Martha was born on April 1, 1927 in Bluffton. One of five children, she was the daughter of Harvey
and Ruby (Russell) Baumgartner. Martha spent much of her young life in Wells County, living near
Uniondale, and later in Defiance, Ohio. She was a 1945 graduate of Defiance High School.

On August 17, 1946, Martha was united in marriage to Dean Decker in Warsaw. Their 65-year
marriage brought many happy memories and together they lovingly raised five daughters on the
family farm.

Martha was known for her love of family; to her, there was always room for more at the table. She
was known for her cooking and baking prowess and especially loved for her pecan rolls, chocolate
chip cookies, and rhubarb custard pie.

After retirement, Martha and Dean wintered in Palmetto, Florida, spending their time at Coach
House Mobile Home Park where Martha enjoyed playing Bingo. She was a member of Clunette
United Methodist Church and loved the fellowship of others. She was friendly, loving and positively
kind.

In addition to her husband, Dean who died in 2012, those who preceded her in passing include her
parents; four siblings: Maurice Baumgartner, Lucille Fisher, Donald Baumgartner and Wayne
Baumgartner and two sons-in-law, Steve Nelson and Craig Doran.

Friends may call at Titus Funeral Home, 2000 East Sheridan Street, Warsaw, on Sunday, February
10th from 2 to 5 p.m. On Monday, a funeral which celebrates Martha’s life will be held in the funeral
home at 11 a.m. An additional hour of visitation will be held prior to the service which Pastor Mike
Beezley will officiate. Burial will be in Wooden Cemetery (Harrison Center).

Memorial gifts may be directed to Clunette UMC, 4227 West 600 North, Leesburg, IN 46538, or to a
charity of the donor’s choosing.  Or, in memory of Martha, bake a double-batch of homemade
chocolate chip cookies to share with those you love.

Martha’s family wishes to thank the staff of Kingston at Dupont and the staff of Heartland Hospice
Care for the tender, loving care which they provided.