To share your memory on the wall of Mark Richards, sign in using one of the following options:

Print
Mark Allen Richards, age 62 of Warsaw and previously a longtime resident of Syracuse, passed away unexpectedly on Thursday, August 27, 2020 just before 9 p.m. in his Warsaw home.

The son of Virgil O. and Olivene May (Ott) Richards, Mark... Read More
Mark Allen Richards, age 62 of Warsaw and previously a longtime resident of Syracuse, passed away unexpectedly on Thursday, August 27, 2020 just before 9 p.m. in his Warsaw home.

The son of Virgil O. and Olivene May (Ott) Richards, Mark was one of four brothers and spent most of his life in Northern Kosciusko County. He was a Wawasee Warrior, having graduated from Wawasee High School with the class of 1976. He worked for many years at Johnson Controls in Goshen, and for the past several years, he worked as a press operator for Chore-Time Brock.

Mark was a kind person with a heart for family. He loved to laugh. Those who knew him best remember him for his unconditional love and as the glue of his family. He was a lover of classic rock and music of all kinds but especially liked Boston, Rush, Pink Floyd, Kansas and the like. He was an avid Green Bay Packers fan and previously enjoyed woodworking.

On July 5, 1985, Mark was united in marriage to Carolyn Dennis who survives in Warsaw. Also surviving with memories to cherish are daughter, Tamra “Tami” Thurby (husband, Rick) of Atlanta, GA; son, Cameron Richards (wife, Katie) of Warsaw; three grandchildren: Jeff Thurby, Brandon Thurby and Rachel Thurby; great-grandson, Charlie Johnson and a brother, Larry Richards of Syracuse. He was preceded in passing by brothers, Joe and Denny Richards and by their parents.

Receive notifications about information and event scheduling for Mark

We encourage you to share your most beloved memories of Mark here, so that the family and other loved ones can always see it. You can upload cherished photographs, or share your favorite stories, and can even comment on those shared by others.

Posted Sep 04, 2020 at 01:01pm
We are so deeply saddened on the passing of Mark. He was always so kind as well as a wonderful neighbor. He would always take the time to visit & share a laugh. Always remember the heartache we all had to take down the beautiful oak tree in his yard after it was damaged by storm, made sure we got some wood for landscaping. Will miss him terribly, we were blessed to have him in our lives!
Neighbors,
Guy & Diane Shaw.
Comment Share
Share via: 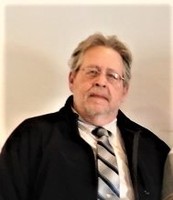