To share your memory on the wall of Maria Sarber, sign in using one of the following options:

Provide comfort for the family of Maria Sarber with a meaningful gesture of sympathy.

Print
Maria (Brack) Sarber, age 83 and a longtime resident of Warsaw, passed away quietly and unexpectedly in Fort Wayne’s Lutheran Hospital. on January 31, 2019.

Born on September 27, 1935 in Antwerp, Belgium, Maria was the daughter of Petr... Read More
Maria (Brack) Sarber, age 83 and a longtime resident of Warsaw, passed away quietly and unexpectedly in Fort Wayne’s Lutheran Hospital. on January 31, 2019.

Born on September 27, 1935 in Antwerp, Belgium, Maria was the daughter of Petrus and Octavia (Van Damme) Brack. She spent her youth in wartime Belgium, immigrating to the United States as a teen.

Maria was a selfless person, giving of herself to help others. She volunteered many hours at Pathway Church where she was member. She enjoyed sewing, travelling and was known for her spunky personality. Maria spent many years serving tables at American Table Restaurant; she had a strong work ethic. Above all, time spent with family was precious to Maria, especially time with her grandchildren.

On August 30, 1991, Maria was united in marriage to Eugene Sarber who survives in Warsaw. Also surviving are daughters, Dawn (Dean) Hance of Warsaw and Heidi Seabourn of Milton, PA; son, Tim (Babby) Porter of West Lafayette; step-daughters, Luanna Keim of Mishawaka and Diana (Dan) Romine of Columbia City; sister, Virginia Wood of Glasgow, Scotland; eight grandchildren; nine step-grandchildren; numerous great-grandchildren and step-great-granchildren. She was preceded in death by her parents.

We encourage you to share your most beloved memories of Maria here, so that the family and other loved ones can always see it. You can upload cherished photographs, or share your favorite stories, and can even comment on those shared by others.

Posted Feb 13, 2019 at 08:50pm
Maria was my room mate in Perham, Mn when she came to America. We had so many Happy times together. I was a bridesmaid at her wedding. All these years we have kept in contact. I have pix I would like to share if you would give me an address. Email me at fuzzhammers33@hotmail.com. I am so sorry and will miss her dearly, I will miss that cute smile . Big hugs to you Dawn,Tim and Heidi
Comment Share
Share via:
TC

Posted Feb 07, 2019 at 09:07am
I remember Maria coming into the Library a lot and always had a smile on her face. We would share stories and when my mom was sick she would always ask how my mom was doing. God bless her family in time of grief.
Comment Share
Share via:
SP

Posted Feb 05, 2019 at 03:58pm
I had the privilege of meeting Maria, in the memory care unit at Masons’, where my mother & Eugene resided! She always had a smile on her face, & I loved the way Eugenes’ face lit up when he saw her! Will miss seeing her!
Comment Share
Share via:
DR

Posted Feb 05, 2019 at 06:53am
Dear Tim & Dawn: We live far away. You do not know us. We share your grief and the certain knowledge of her "peace beyond all understanding" 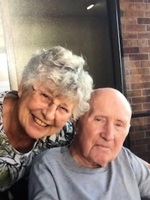