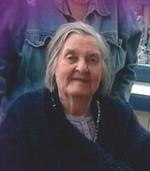 Mable Jean Vickers, age 84 and a resident of Warsaw, passed away after having recently had a stroke. She was receiving care through Kosciusko Home Care and Hospice at the time of her 6:55 p.m. death on Friday, May 31, 2019.

Jean, as most knew her, was born on August 27, 1934 in Jackson, Kentucky. She was the daughter of George and Rose (Raleigh) Fletcher and was one of six children.

Jean was a homemaker whose giving, caring nature touched every person who knew her. She was both strong and nurturing and could be feisty. She approached each day with a selfless spirit and a touch of humor. She enjoyed traveling and did so for more than twenty years as a military wife; often moving the family from place to place by herself to follow her husband’s Air Force career. She was woman of strong Christian faith who loved the Lord. She enjoyed country music, flowers and gardening. She liked to crochet, too.

Jean was a supportive mother and grandmother who will be missed by many. A short list of those affected by her passing includes son: Bobby (wife, Cecilla) Vickers of Warsaw; three daughters: Barb Holbrook of Warsaw, Brenda Rose of Warsaw and Lisa (husband, Ron) Harman of Claypool; 12 grandchildren, 20 great-grandchildren and 12 great-great-grandchildren. She was preceded in death by two brothers, three sisters, two grandchildren and her parents.

Services, officiated by Chaplain Bob Jarboe of Kosciusko Home Care and Hospice, will be held privately at Titus Funeral Home. Burial will follow in Warsaw’s Oakwood Cemetery. Those wishing to express their sympathy may do so by leaving condolences for the family at www.TitusFuneralHome.com.