To share your memory on the wall of James Smelser, sign in using one of the following options:

Print
James Edward Smelser, a resident of Winona Lake, passed away quietly on Thursday, January 3, 2019 at 8:35 a.m. at Grace Village Healthcare Center. He was 86 years old.

Born in Mishawaka to John and Edith (King) Smelser, James was one of... Read More
James Edward Smelser, a resident of Winona Lake, passed away quietly on Thursday, January 3, 2019 at 8:35 a.m. at Grace Village Healthcare Center. He was 86 years old.

Born in Mishawaka to John and Edith (King) Smelser, James was one of four children. He graduated from Mishawaka High School in 1950 and attended college before joining the military.

Jim, as most knew him, enlisted in the United States Navy on February 4, 1952 in Chicago, Ill. He served in the time between Korea and Vietnam, eventually earning the rank of Petty Officer 3rd Class. Jim served aboard aircraft carriers as a photographer, often riding face down in the planes on reconnaissance missions to get the shots he needed. He was honorably discharged on July 31, 1959 from the US Naval Air Special Weapons Facility on Kirtland Air Force Base in Albuquerque, New Mexico.

On April 16, 1978, Jim was married to Barbara (Mangus) Kosior in Westville, Indiana. Together, they would share more than forty years before his Thursday morning passing. They also shared many trips, travelling across the US and many happy memories with grandchildren.

Jim was a past commander of American Legion Post 49 and a member of Westville Jaycees, Winona Lake Lions Club, and, for fourteen years, assisted with Back to the Days of Kosciuszko. He attended First Christian Church, loved camping, fishing and was never one to shy away from an adventure. In fact, Jim was a professional rodeo clown for some time. He was also the photographer for South Bend, Plymouth and New Paris Speedways. For his 80th birthday, Jim checked an item off his bucket list by climbing the Cape Hatteras Lighthouse; he loved lighthouses.

Jim’s life will be celebrated privately in a service at Oakwood Cemetery, Warsaw. Military graveside honors will be rendered by members of the United States Navy and of American Legion Post 49. Those wishing to express their sympathy may give to the Activities Department of Grace Village.

Online condolences may be left at www.TitusFuneralHome.com
Read Less

Receive notifications about information and event scheduling for James

The insignias listed here may be subject to copyright and/or trademarked. Those copyrights and trademarks are owned by the respective organizations.

We encourage you to share your most beloved memories of James here, so that the family and other loved ones can always see it. You can upload cherished photographs, or share your favorite stories, and can even comment on those shared by others.

Posted Jan 04, 2019 at 07:11am
Jim was always volunteering when I knew him through his wife Barb, he had a great sense of humor and was a very kind person to others around him. My deepest condolences to Jim's family in this time of loss. No matter what age someone is, it's never easy when they are no longer among us and we miss them terribly.
Comment Share
Share via:
J

Posted Jan 03, 2019 at 09:14pm
I am sorry to hear of Jim’s passing. I remember him from when we took the 3rd Graders to Back to the Days of Kosciusko and when he came to the Wax Museum. You are in my thoughts and prayers, 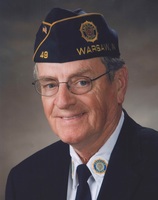