To share your memory on the wall of Jim McConnell, sign in using one of the following options:

Print
Jim McConnell, age 82 and a resident of Leesburg, passed away unexpectedly at his home on Thursday, February 20, 2020.

Born on June 26, 1937 in Warsaw, he was one of eight children born to Roger and Bessie (Snellenberger) McConnell. He... Read More
Jim McConnell, age 82 and a resident of Leesburg, passed away unexpectedly at his home on Thursday, February 20, 2020.

Born on June 26, 1937 in Warsaw, he was one of eight children born to Roger and Bessie (Snellenberger) McConnell. He was raised in the Warsaw area and was a graduate of Leesburg High School where he was manager of the school’s basketball team. In his youth, he worked as a caddy at Tippy Lake Country Club. He was a lifetime Chicago Cubs fan.

He spent much of his professional career driving trucks and hauled milk for several years. Later he worked for Warsaw Chemical and for Schneider Trucking where he spent many years, logging hundreds of thousands of safe miles. After retirement from driving, he worked for Stowe Davis in New Paris.

Jim was a member of First Christian Church, Warsaw. He was an IU basketball fan and a Dallas Cowboys fan and was especially a fan of longtime coach, Tom Landry. He enjoyed golfing and working outside. He was also a devoted husband to his late wife, Anna. He was always sure to assist her with her tasks; as she was a master gardener this meant Jim could often be found helping her to tend flower beds.

Surviving is the pair’s daughter, Chris Leiter of Warsaw. Also surviving are Jim’s brothers, Larry (wife, Coraethel) McConnell and Nolan (wife, Bonnie) McConnell and numerous nieces and nephews. In addition to his wife of nearly 58 years, those who preceded Jim in passing include brothers, Glenn and David McConnell and sisters, Pat Stookey, Dorcas Kipker and Linda Hair.

A Life Celebration® will be held at First Christian Church, 115 Park Ridge Drive, Warsaw, on Monday, March 2, 2020 at 11 am. Friends may visit one hour prior to the service from 10 to 11 am at the church. Burial will be in Oakwood Cemetery.

Those wishing to express their sympathy may give to First Christian Church Building Fund, 115 Park Ridge Dr, Warsaw, IN 46580.
Read Less

Receive notifications about information and event scheduling for Jim McConnell

We encourage you to share your most beloved memories of Jim McConnell here, so that the family and other loved ones can always see it. You can upload cherished photographs, or share your favorite stories, and can even comment on those shared by others.

Posted Feb 27, 2020 at 05:10pm
Chris,
Please accept my condolences and prayers for you with the passing of your father.
May your many memories of him comfort you in the days ahead.
Joyce McConnell 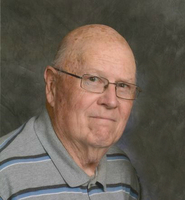