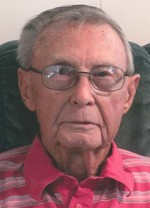 Frederick “Porky” Neer passed away as the result of a motor vehicle accident near his winter home in Lake Placid, FL. A longtime resident of Warsaw, he was 93 years old.

Porky was one of eleven children. He was born on January 12, 1925 in Warsaw, the son of Wilbur and Pauline (Oswalt) Neer. He was drafted to serve his country in the Army in March of 1943 and was honorably discharged in September of that year. Later in life, Warsaw High School awarded him honorary graduation, having been drafted to service before completion of his schooling.

Porky had a good sense of humor and will be missed by many. A list of survivors includes wife, Linda Rackow of Lake Placid, FL; son, Danny Neer of Warsaw; brothers: Donny Neer of New Paris and Ralph Neer of Warsaw; sisters, Katie Taylor of Ocala, FL and Shirley Timmons of Leesburg. He is also survived by several grandchildren and great-grandchildren. Preceding him in passing were wife of more than 50 years, Mildred Neer; brothers, John and Harold Neer and sisters, Mary Kinch, Martha Groves, Leatrice Seymour and Helen McKinney.

Visitation will be held on Friday, October 12th from 9 to 11 a.m. at Titus Funeral Home¸2000 East Sheridan Street, Warsaw. A funeral service, officiated by Pastor Jamy Gregory of Warsaw Community Church, will begin at 11 a.m. in the funeral home. Burial will be in Wooden Cemetery near Harrison Center Church.

Those wishing to express sympathy may leave condolences on Porky’s online obituary at www.TitusFuneralHome.com. Memorial gifts may be given to American Legion Post 49, 301 North Buffalo St., Warsaw, IN 46580.