To share your memory on the wall of Evelyn Rake, sign in using one of the following options:

Provide comfort for the family of Evelyn Rake with a meaningful gesture of sympathy.

Born in Bronx, New York on February 4, 1959, Evelyn Maertz was the daughter of Edward and Alice (Rownes) Maertz. She was one of five sisters and was raised in New York, graduating from Bronx High School of Science in 1977. She later went on to earn an associate’s degree and worked primarily in accounting and as an office manager for several Warsaw-area companies.

Evelyn was a fun-loving, easy-going person. She rarely knew a stranger and was a jokester at heart. As the co-director of the Kosciusko County Historical Society, Evelyn often lead paranormal tours through the Old Jail. She was a founding member of a local paranormal group and loved TV shows like Ghost Hunters and anything Sci Fi. She also enjoyed trying her luck at the casino and spending time with her sons.

Evelyn is survived by her two sons: Edward Rake and Daniel Rake of Warsaw and Lafayette, respectively. She is also survived by her sister, Marianne Prater and by many nieces and nephews. Those who preceded her in passing include her parents and three sisters: Ellen Short, Joan Radigan and Carol Ann Tozzi.

It was Evelyn’s request to be cremated. A public visitation will not be held at this time though a memorial gathering is in the planning stages. Condolences may be left for the family through the funeral home website at www.TitusFuneralHome.com.
Read Less

Receive notifications about information and event scheduling for Evelyn

We encourage you to share your most beloved memories of Evelyn here, so that the family and other loved ones can always see it. You can upload cherished photographs, or share your favorite stories, and can even comment on those shared by others.

Posted Apr 17, 2020 at 08:35pm
Our sincere condolences to Eddie, Danny and their extended families as well as Evelyns sisters families. May she Rest in Peace. With love,

Posted Apr 14, 2020 at 04:57pm
Evelyn, thanks for peaking my interest in the paranormal and being so kind and patient when investigating with me.

Posted Apr 14, 2020 at 04:51pm
So sorry to hear of Evelyn's passing. Keeping her family in my thoughts during this difficult time. Sending all my love and hugs.

My sympathies at Evelyn's passing. I enjoyed getting to know her and to working with her at the Old Jail. She will be
much missed. Janet Kirkpatrick
Comment Share
Share via: 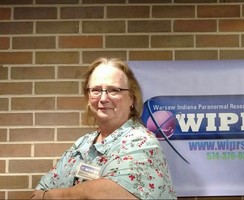