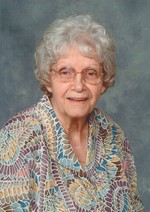 Doris Louise Lucas of Warsaw passed away at 7:45 p.m. on Friday, December 14, 2018 in Grace Village Healthcare Center, Winona Lake. She was 84 years old.

Doris was born on December 29, 1933 in Bluffton, Indiana to Charles and Margaret (McFarren) Wilson. Doris was one of seven children and graduated from Bluffton High School with the class of 1951. On June 16, 1951 she was married to Gerald Leon Lucas with whom she shared more than 67 years.

She worked at the Dime Store in her younger years and later worked for Serenade Foods where she retired. She was a Girl Scout leader in the Kendallville and Warsaw areas and was a longtime member of Christian Church of Milford. She enjoyed sewing, cooking and spending time with her family. She adored her grandchildren and great-grandchildren.

Friends may join family for visitation at Titus Funeral Home, 2000 East Sheridan Street, Warsaw, on Tuesday, December 18th from 3 to 8 p.m. A funeral service, officiated by Pastor Gary Boschain of First Christian Church, Warsaw, will be held on Wednesday, December 19th at 10 a.m. in the funeral home with gathering for one-hour prior. Burial will be in Pleasant View Cemetery.