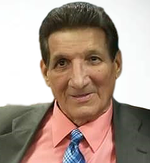 Pastor Don Chadwick, a resident of Warsaw, took the hand of the Lord and went home on Saturday, January 5th just after 5:00 a.m. He was in his residence at the time of his death and was 74 years old.

Given the name Donald Michael Chadwick, he was born on June 7, 1944 in English, West Virginia. He was the son of Buelah Chadwick. He spent his formative years in West Virginia, moving to Kosciusko County in his mid-teens. On May 8, 1993, he was united in marriage to Tina Fryfogle in Warsaw. Tina and their four children survive.

Don loved people and rarely knew a stranger. He was called to minister as an Evangelist more than forty years ago and served as Pastor to Full Gospel House of Praise in Warsaw for the past 14 years. He was blessed with several talents and could play many musical instruments. More personally, he enjoyed watching professional basketball and shooting hoops with friends. He was a New England Patriots fan and enjoyed hunting and fishing. During quiet times, he found solace in studying scripture.

Friends may join family for visitation and viewing at God’s Highway to Heaven Church, 555 Weber Street, Warsaw, on Thursday, January 10th from 2 to 4 p.m. and 6 to 8 p.m. Funeral will be in the Church on Friday, January 11th at 11 a.m. with gathering for one-hour prior. Reverend Bob Brown of God’s Highway to Heaven will lead the officiants. Burial will follow in Oakwood Cemetery, Warsaw. Arrangements are with Titus Funeral Home; online condolences may be left at www.TitusFuneralHome.com.

Memorial gifts may be directed to Full Gospel House of Praise or God’s Highway to Heaven.