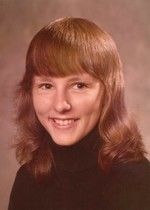 Debra L. Minglin, a longtime resident of Warsaw, passed away quietly after a courageous battle with cancer on March 22, 2019 at 8:35 a.m. in her home. She was 62 years old.

Born on February 1, 1957 in Logansport she was the daughter of Patricia (Morrison) White. Debra, or Debbie as most knew her, graduated from Northwestern High School in Kokomo, after the merger of several area schools closed Hawthorn High where she attended.

Debbie enjoyed the outdoors. She was a self-professed tomboy and kept active in softball and bowling leagues. She worked nights at Walmart for the past 29 years in stocking, keeping the store supplied. Although she was a hard worker, family was her biggest priority and she loved time spent with them.

Visitation will be held at Titus Funeral Home, 2000 East Sheridan Street, Warsaw on Tuesday, March 26th from 10 a.m. to 1 p.m. Beginning at one o’clock, Certified Funeral Celebrant Sharon Brockhaus will officiate a celebration of Debra’s life. Burial will follow at Oakwood Cemetery.

Those wishing to express their sympathy may give to K21 Cancer Care Fund or to St Jude Children’s Research Hospital with envelopes available at the funeral home.