To share your memory on the wall of Joyce (Barber) Bowen, sign in using one of the following options:

Provide comfort for the family of Joyce (Barber) Bowen with a meaningful gesture of sympathy.

Print
Joyce (Barber) Bowen, age 83, passed away quietly on Friday, January 18, 2019 at 8:53 p.m. in her daughter’s Columbia City residence. She was surrounded by her loving family at the time.

Joyce was born in Warsaw on August 10, 1935 and lived most of her life here. The daughter of Warren and Winifred (Koser) Howe, Joyce was a 1954 graduate of Warsaw High School. She worked for Warsaw Coil for many years, was a member of Warsaw’s First Christian Church and was active in the Order of the Eastern Star.

She enjoyed crocheting, working crossword puzzles and, in quiet times, enjoyed reading Christian novels but nothing made her happier than to laugh with family. Time spent with them was precious to her.

We encourage you to share your most beloved memories of Joyce (Barber) Bowen here, so that the family and other loved ones can always see it. You can upload cherished photographs, or share your favorite stories, and can even comment on those shared by others.


Our hearts go out to you at this time of sorrow. Prayer's for peace and comfort. Joyce loved our accent. I'll always remember her sharing stories of her figuring out what we were saying. She was a special person. Love & hugs to y'all.
Tammy & Dave Patrick
Charles & Joan Howard
Comment Share
Share via:
HS

Posted Jan 21, 2019 at 10:02am
Laura and I just want to say that we though Joyce was a really special lady, and our prayers are with you! 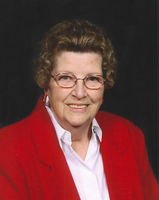